New York – A study shows how smoking cigarettes causes severe infection by SARS-CoV-2, the virus that causes Covid-19, in the airways of the lungs.
The team utilized a platform known as an air-liquid interface culture, which is grown from human airway stem cells and closely replicates how the airways behave and function in humans.

The airways, which carry air breathed in from the nose and mouth to the lungs, are the body’s first line of defence against airborne pathogens like viruses, bacteria and smoke.

“Our model replicates the upper part of the airways, which is the first place the virus hits,” said study author Brigitte Gomperts from the University of California, Los Angeles in the US.

“This is the part that produces mucus to trap viruses, bacteria and toxins and contains cells with finger-like projections that beat that mucus up and out of the body,” Gomperts added.

The air-liquid interface cultures used in the study were grown from airway stem cells taken from the lungs of five young, healthy, non-smoking tissue donors.

To replicate the effects of smoking, the researchers exposed these airway cultures to cigarette smoke for three minutes per day over four days.

“This type of model has been used to study lung diseases for over a decade and has been shown to mimic the changes in the airway that you would see in a person who currently smokes,” said Gomperts.

Next, the group infected the cultures exposed to cigarette smoke — along with identical cultures that had not been exposed — with live SARS-CoV-2 virus and the two groups were compared.

In the models exposed to smoke, the researchers saw between two and three times more infected cells.

“If you think of the airways like the high walls that protect a castle, smoking cigarettes is like creating holes in these walls. Smoking reduces the natural defences and that allows the virus to set in,” the authors noted.

Is clinical criteria for autism diagnosis right for all?

Song: Ikko Punjab
Singer: Fareed Khan & TR Kohli
The 2020 Indian farmers' protest is an ongoing protest against the three farm acts which were passed by the Parliament of India in September 2020. The acts have been described as "anti-farmer laws" by many farmer unions, and politicians from the opposition also say it would leave farmers at the "mercy of corporates".
#Fareedkhan #IkkoPunjab #KisanAndolan #kisaanmajdoorektazindabad #PunjabKisaan #kisanektamorcha #KisanProtest #PunjabKisaanEkta

Ikko Punjab I Dilli Nu Lalkaray | Pakistani Singer Fareed Khan Dedicates a Song to Indain Farmers
The 2020 Indian farmers' protest is an ongoing protest against the three farm acts which were passed by the Parliament of India in September 2020. The acts h...
youtube.com
14    View on Facebook

eawaz
14th January—Today, the death anniversary of Arfa Karim, Pakistan’s computer prodigy, is being observed. Her genius symbolised the potential and talent of Pakistani youth. 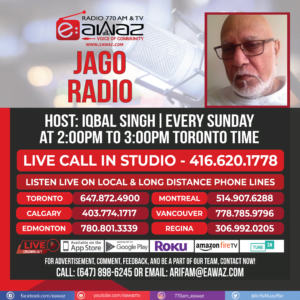